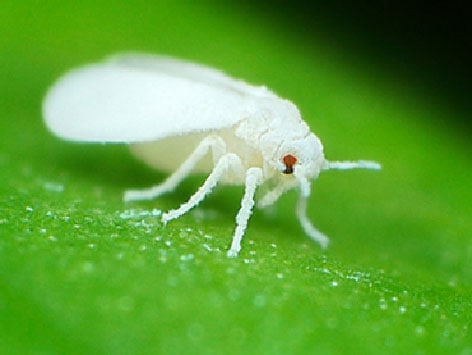 Whiteflies are a common pest of many ornamental plants throughout Florida and the world. There are more than 1,500 species worldwide and over 75 reported in Florida. Some of the most important species in Florida are the ficus whitefly, and the citrus whitefly. Although infestation does not always require treatment, it is important to be able to identify and monitor for these pests for effective integrated pest management (IPM).

A generalized life cycle of the whitefly is as follows: The eggs are laid on the undersides of the leaves and hatch in 4 to 12 days into active, six-legged nymphs (crawlers). The crawlers move around for several hours, then insert their mouthparts into the leaves and stay there. After molting three times, they pupate and then become adults. The pupal case remains on the plant tissue even after the adult has emerged. How long it takes for the insects to develop from eggs to adults varies from 4 weeks (summer) to 6 months (winter).

Whiteflies have piercing-sucking (needle-like) mouthparts with which they puncture the leaf and suck the plant fluids. The top sides of leaves on infested plants become pale or spotted due to these insects feeding on the undersides of the leaves. Oftentimes an infestation goes unnoticed until leaves turn yellow or drop unexpectedly, or until an infested plant is disturbed and small clouds of whiteflies emerge from it. Some whitefly species can cause greater damage by transmitting plant viruses.

Whiteflies (as well as soft scales, mealybugs, and aphids) excrete a sugary substance called honeydew, and an unsightly black fungus called sooty mold grows on the honeydew. Besides being unattractive, sooty mold may interfere with photosynthesis, reduce plant growth, and cause early leaf drop. Sooty mold usually weathers away after an insect infestation is controlled. Ants also feed on the honeydew, so if ants become a problem, plants should be examined closely for these sucking pests.

Whiteflies are small, winged insects that resemble small moths and are covered by white waxy powder. Despite their name and appearance, whiteflies are neither moths nor flies, but true bugs more closely related to aphids and scale insects. Whiteflies have hair-like, piercing-sucking mouthparts that extract nutrients from plant tissue.

Most individuals are 1/16 inch (1.6 mm) long and have four wings. The most accurate method of identification is with a microscope using the final instar immature stage (nymph) or “pupa”. However, this is often not possible or unrealistic under field conditions. Therefore, using a 10-40X hand lens to examine adults and pupae is the best field identification method. Whitefly nymphs typically occur on the undersides of leaves. They are flat, oval, and somewhat translucent. Some species are light green to whitish and somewhat transparent. As the nymphs mature, they often become “plump,” develop distinct eye spots, and are easier to see.

Whiteflies undergo four life stages: Egg, nymph, final instar nymph or “pupa,” and adult. The eggs are usually deposited on the undersides of leaves and hatch in 4 to 12 days depending on temperature. Six-legged nymphs (crawlers) emerge from eggs and are mobile for up to several hours searching for a feeding site. After settling on a feeding site, they insert their hair-like piercing-sucking mouthparts into the leaves to feed on plant sap. Subsequent nymphal stages lack functioning legs and remain in this location for the remainder of their development. They pass through four nymphal instars, and in the final nymphal stage, develop wings and other adult characters. This final stage is sometimes referred to as a “pupal” stage. This stage is when species can be most accurately identified. Next, an adult whitefly will emerge from the pupa to reproduce and lay eggs for the next generation. The pupal case remains on the plant tissue even after the adult has emerged. Development time from egg to adult varies from 4 weeks to 6 months depending on whitefly species, host plant, and environmental conditions.

The top sides of leaves on infested plants become pale or spotted due to whiteflies feeding on the undersides and extracting chlorophyll. Due to their small size and obscure behavior, whitefly infestations may go unnoticed until leaves turn yellow or drop unexpectedly, or until an infested plant is disturbed and small clouds of adult whiteflies emerge from it. Heavy infestations will defoliate infested regions or the entire plant. Some whitefly species may also cause more severe indirect damage by transmitting plant viruses.

Whiteflies, as well as soft scales, mealybugs, and aphids, excrete a sugary substance called honeydew. This substance coats surfaces beneath the feeding site and facilitates the growth of an unsightly black fungus called sooty mold. Besides being unattractive and reducing marketability, sooty mold may reduce photosynthesis and plant growth, and cause premature leaf drop. Ants and wasps also feed on the honeydew and may serve as an indicator that a plant is infested with whiteflies or other honeydew-secreting pests.

Proper plant selection, installation, irrigation, and fertilization are critical to managing whiteflies and other piercing-sucking pests of landscape ornamentals. Many whiteflies also feed and establish on weed species and vegetable plants adjacent to ornamental plantings.

Like many other sap-feeding pests, whiteflies may benefit from increased nutrient content of plant vascular tissue. For example, excessive nitrogen fertilization may lead to greater nitrogen content in plant tissue, which whiteflies consume, resulting in greater reproduction and survival, and faster development. Also, drought-stressed plants often exhibit greater nitrogen and sugar concentrations in their vascular systems. Sap-feeding insects such as whiteflies feed on this tissue and may benefit from the increased nutrient content.

The rugose spiraling whitefly became a damaging exotic pest of landscape ornamentals for several years following its introduction to Florida in 2009. Citrus whitefly nymphs, one of the most common whitefly species attacking ornamental plants, are also frequently parasitized by a small wasp.

In many cases, foliar applications of low-impact insecticides like insecticidal soaps or horticultural oils can effectively reduce whitefly populations. 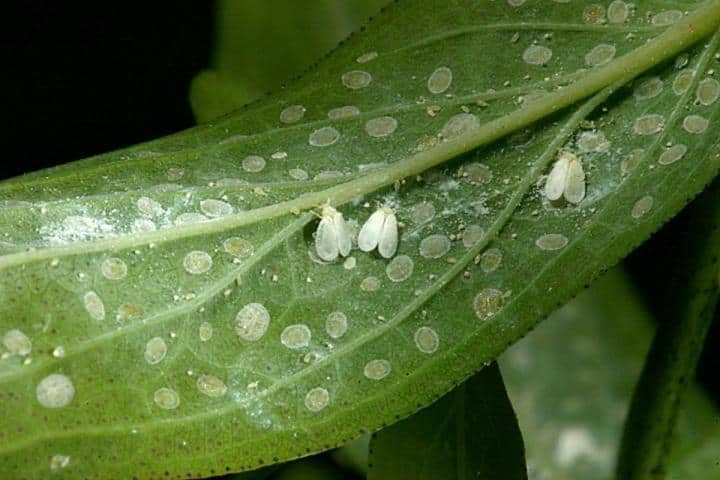 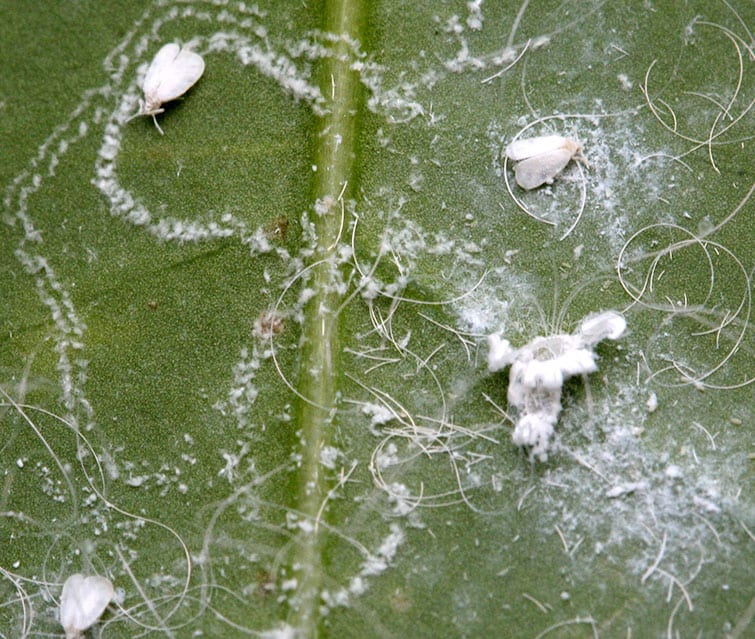